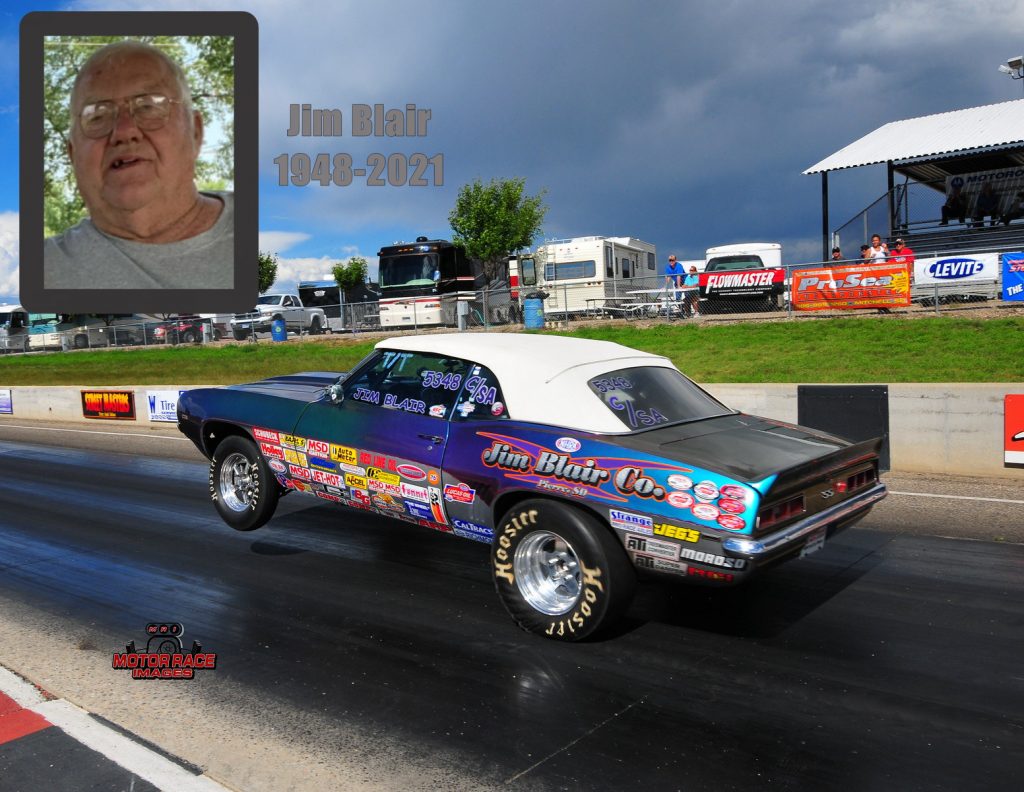 Please join with our Oahe Speedway family in remembering the life of Jim.
and keep Jim’s family in your thoughts and prayers.

Jim was born March 4th, 1948 in Hot Springs, SD to Lois Ortberg. He was adopted by Robert and Inga Blair. He grew up in the Milesville area and attended Spring Creek school. He later attended Philip High School into his sophomore year. He was good with his hands and was a genius when it came to motors of any size.

He married the love of his life, Sandra Lowe, on December 22, 1968 in Meadow, SD at the Indian Creek Lutheran Church. They made their home in Milesville and started ranching and farming. To this union were born three children, Todd in September 1969, Tanya in January 1971 and Tiffanie in July 1977. Throughout their marriage they farmed, raised cattle and hogs, built many roads and dams with their dirt moving business, along with owning the Ridge and Ridge Rebuilders. In his younger years, he loved to fly and even had his own plane. During the last 10 years on the farm, he built a large hog farm facility that he designed and helped build with the help of Don Schultz and other in the area. While running the hog farm they earned Master Pork Producer in 1992 and again in 1999. In 2003, they sold their farm and moved to Pierre, SD where he went to work trucking and once again being the neighborhood fix it man. Jim was mechanically inclined from a young age. He often talked about how he would tear things apart growing up just to see how they worked. All his life he was able to design and create things for the farm and really for any aspect of his life. He was able to look at or listen to an engine and determine what was wrong with it. Drag racing was a big part of his life from the time he was young. He loved working on cars and figuring out how to make them go faster. The racetrack was one of his favorite places to be along with his family. He would love to go talk to other racers and loved when people would come look at his car. Many friendships were formed, and all were very important to him, even though he would not always admit it. He was very proud of his race car and spent a lot of time working on it. He became very good friends with Joe Harry who would drive his car for him when it became too hard for him due to his health. Joe and Jim had developed a relationship over the past couple years that brought them both laughter and created a wonderful racing team.

The most important thing to him though was his relationship with God. He was a very strong Christian and would share the word of God with everyone he came into contact with in his life. For a man that had minimal education, he could quote most any part of the Bible to you.